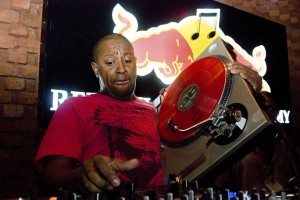 As a DJ who made his name in Drum & Bass DJ Marky doesn’t immediately spring to mind when we think of Brazil. The thing is, he’s a massive draw all over the world, a superstar in Brazil, and his music is both influential and heavily influenced by his land of birth. It’s also a whole lot of fun.

It’s hard to believe that just starting to describe the beginnings of DJ Marky’s career involves mentioning him being DJ of the year in Brazil two years running (in ’95 and ’96). His early career also saw him pick up residencies in the hottest clubs and numerous radio shows all across Brazil. By the late 1990s, with Drum & Bass hitting its peak, DJ Marky hit the shores of the UK and soon enough he was working alongside names like Goldie and DJ Hype and had a residency at Movement.

The result of all this talent? His One World show on Radio 1, another show on MTV Brazil and International acclaim. Not bad going, if you ask us.

To us, DJ Marky’s greatest achievement is to instigate an entire genre; Sambass. While the propulsive nature of Drum & Bass can sometimes be oppressive, by mixing in the rhythms and grooves of Samba DJ Marky creates music that highlights the communal nature of dance. DJ Marky really did help bring South American vibes into European dance culture, and we’ll forever be thankful.

Check out Carolina Carol Bela to see what we mean.