Celebrity chef Marcus Samuelsson recently brought his famous Harlem Red Rooster concept to London’s Curtain Hotel. Red Rooster celebrates the roots of American cuisine, channelling Southern soul food alongside the diverse culinary traditions of New York, and Marcus' Northern European upbringing. Staying true to its roots, the restaurant brings the heart and soul of New York dining to us, allowing patrons a taste of some of the finest Manhattan meals without having to leave London's fashionable East End.

Music is a key part of the Red Rooster experience. They host live music seven nights a week, have recently released a live album performed by their in-house band and have playlists that are designed to complement the musical programme and dining experience throughout the week. With the music being a crucial aspect of the overall experience, Open Ear’s role as music partners is of paramount importance and we are privileged to have been given the opportunity to shape the brand's identity through music.

Initially consulting over Skype, from London to New York, we began to explore the brand's musical identity. We listened to Marcus’ story and learned about how his upbringing defines the Red Rooster brand. Marcus is part-Ethiopian, part-Swedish and US-born which immediately presented us with a diverse range of music to use as a starting point.

In the lead up to, and post, Red Rooster opening, we designated a curator from our team who based themselves in the restaurant. They were able to get a first-hand understanding of Red Rooster’s brand identity, target customer demographic, location and visual design. We conducted listening sessions in the venue to get a better sense of how the playlists work in their environment and discuss immediate feedback from the staff and management.

Tracks that fit the brief were then handpicked on their own merits and tested with Marcus and the team live in the restaurant. This gave the restaurant team a chance to get more familiar with what worked and what could be changed.

We took what we learnt from the consultation and created a musical identity which mixed old-school hip-hop from the streets of Harlem, classic soul and blues from the American South, and a sprinkle of Swedish rap, Ethiopian jazz and Afrobeat as a nod to Marcus’ heritage. We completed the collection with some tastefully selected grime and trip-hop that was specially requested by Marcus as a nod to London and the UK.

For a musical identity as diverse as Red Rooster’s to work effectively, we split the selection into three playlists designed to complement the atmosphere throughout different times of the day and days of the week. Playlists also respond to the live music programme in the restaurant, with a specially curated gospel playlist on Sunday afternoons, and alternating soul, Afrobeat and reggae playlists throughout the week to warm up for the live entertainment.

Following a series of excellent reviews with customers wanting to know more about their music, Open Ear presented Red Rooster the opportunity to tell their musical story via our exclusive partnership with Shazam. Using the new Shazam code technology, customers can access the playlists directly on their mobile, identify the songs currently playing in the restaurant and get the playlists sent directly to their email.

Red Rooster printed the codes on their menus, business cards and on window displays visible to customers as they entered the restaurant. This helped place music firmly at the core of the dining experience and gave customers a chance to engage with the Red Rooster musical identity outside of the restaurant. 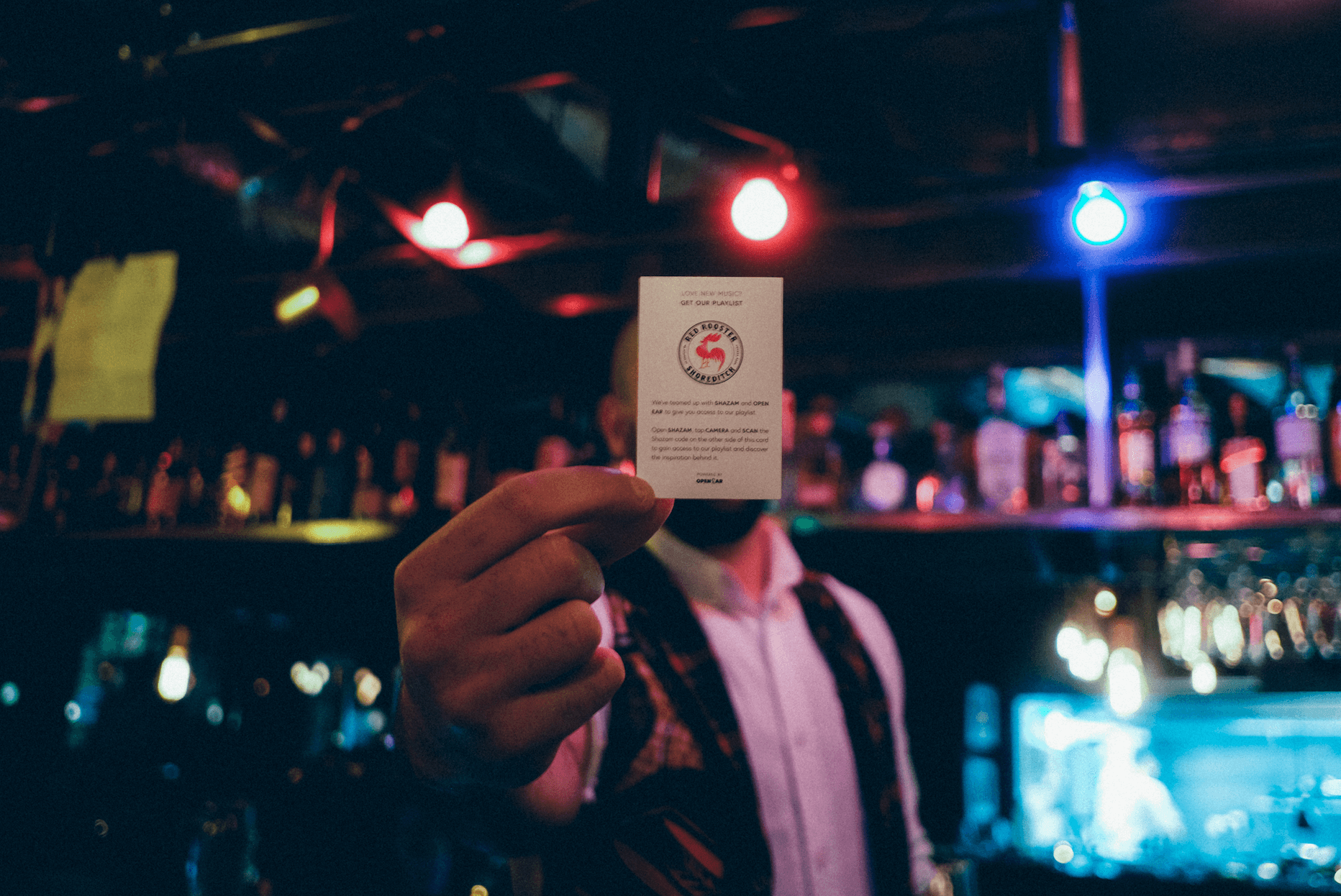 In Spring 2018, Red Rooster released the album 'Live at Red Rooster Harlem', bringing recordings made in the restaurant, including soulful sounds by the 11-piece, genre-crossing Rakiem Walker Project, jazz tunes by Nate Lucas, and powerful gospel hymns by Vy Higginsen's Sing Harlem Choir. The album also includes beautiful poetry by David Ellis. To support the release, Open Ear provided links to buy the album via the Shazam app, so any customers liking the sound of Red Rooster can use the app to easily download the album.

Case Study: How Open Ear developed a sound vital to the success of a pop-up store