Recent research at Cornell University, and published in the Journal of Experimental Psychology: Human Perception and Performance, has drawn new light on something we’ve covered before; the link between aural perception and sense of taste.

By taking loud environments like those found in aeroplane cabins, they discovered that certain tastes were enhanced, some were subdued, while others suffered little impact at all. As co-author Robin Dando has said, “[the] study confirmed that in an environment of loud noise, our sense of taste is compromised. Interestingly, this was specific to sweet and umami tastes, with sweet taste inhibited and umami taste significantly enhanced”. Dando went on to explain that “the multisensory nature of what we consider ‘flavour’ is undoubtedly underpinned by complex central and peripheral interactions. Our results characterise a novel sensory interaction, with intriguing implications for the effect of the environment in which we consume food.”

Those implications are already being tested, it turns out, by Professor Charles Spence of Oxford University who has been testing how music can be used to boost flavour and potentially offset the impact of aircraft cabin noise on the taste of in-flight meals. The end result? A playlist which British Airways has posted that they claim could help make the food they serve on board their planes a more enjoyable experience. Of course, we’ve got it featured below, and you can read more about it here. 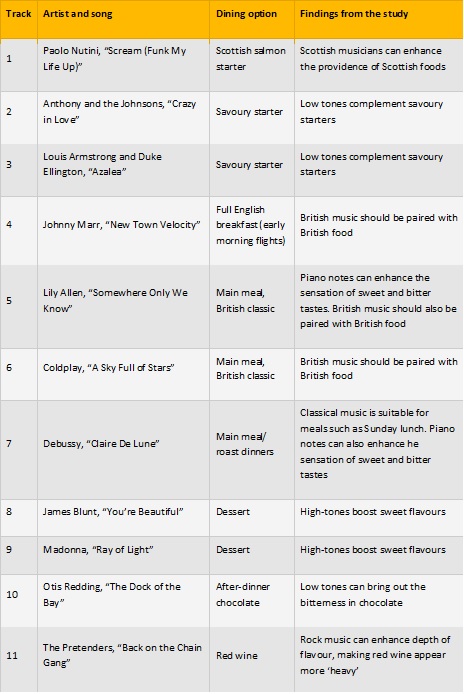