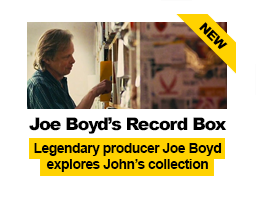 So the John Peel Archive have been adding Peel Sessions for a while, but we’ve been waiting pretty eagerly for the beginning of the promised digitisation project of Peel’s fabled record collection, and now it has begun. Interestingly, the Archive have chosen to do this in a way that is as informative as it is entertaining. By bringing in guests to select records from the collection that they love, and that resonate with their life, the Archive hopes to explore the cultural context of the collection and the music contained within it.

It’s a wonderfully accessible project. Peel’s own record sleeves have been photographed, words put together both by the Archive and by their guest contributor, and Peel’s vinyl has been digitised so you can hear what it’s all about. Even better, you can read it all if you’re dipping in and out or you can take 25 minutes to watch a video with the contributor and follow their journey through the collection. It's a great way to keep discovering new music and the stories behind the music. Which is the way it should be, we reckon.

The first of the contributors is Joe Boyd, record producer and the man who booked Dylan for Newport Folk Festival in 1965 when he infamously went electric. It’s a great tour of 60s and 70s Rock and Folk, and well worth spending some time with whether you’ve read Boyd’s much lauded book ‘White Bicycles’ or not.

The shows are titled ‘Record Boxes’, and an initial run of six have been compiled. The eventual aim for the Archive is to have thousands of Record Boxes compiled by the public as a sort of people’s musical history. It sounds fantastic and we can’t wait to see who the other guests are and what musical treats are in store next.

Make sure to check it out.