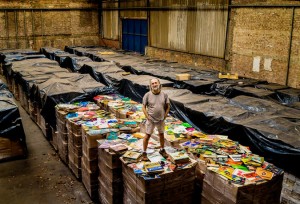 There’s a good chance you spotted this article over the last few days that tells the story of a Brazilian man named Zero Freitas who is amassing quite a significant record collection. His collection is so large that it contains collections that number in the millions, and once a heading suggesting he wanted to own all the vinyl in the world was tagged on by the New York Times, the social media explosion was all but guaranteed.

The thing is though, it got us considering the nature of collecting music. You see, every day at Open Ear Music we discover new music and we add the best we hear to our systems so it can be played via MusicManager in all our client’s venues. Which is to say that it’s hand crafted, curated, and considered. We don’t offer all the music in the world; we offer quality.

‘Mere quantity counts for little. Quality in the true sense is what counts, and quality and rarity are by no means synonymous’ Semeonoff’s ‘Record Collecting; a guide for beginners’ from 1949.

At the same time we’re updating playlists, deciding tracks have had their exposure time, and now it’s the chance of someone fresh and exciting to take the space. We’re also considering the venues where this music is played, the people who eat, drink, relax, work, and shop there, as well as the artists and labels whose music it is. In this way, our collection is less for us and more for that moment a song is heard. Our collection may be catalogued, but perhaps it’s too fluid to be a true collection? That’s not even to mention the fact that it’s digitised. Maybe we should consider it an accumulation of time, care, passion, and purpose. It seems a truer sense of what it is we do.

Zero Freitas, on the other hand, can perhaps better be described as a hoarder. While it is clear that some of what he owns is of huge emotional and sentimental value to him, a great deal of it must go unheard, unseen, and ultimately forgotten. How else can a single person own ten copies of one album? Many independent retailers would kill for stock levels like that. At the same time, however, his hoard grows and grows, slowly being catalogued so that one day it can be shared with the public as a gigantic music library. Whether this will happen or whether it’s simply a way for an aging hoarder to justify his obsession and provide his collection with a purpose is hard to say. For Zero to have lived in the shadows for so long, and for the big unveil to have come now when collecting records has, to a certain market, become something rarefied is not much of a surprise. Collecting in this sense is as much for the purpose of showing the collectors ability to distinguish quality as it is for anything else. Yet, the fact he did stay quiet for so long is also telling. Now his story is out, the demand to share his collection will grow.

Let’s return for a moment to the thought that our collection, here at Open Ear, is an accumulation of time, care, passion, and purpose. It’s that purpose that is most important to us. It drives us to improve our collection, to never allow it to go stale, to improve its cataloguing, and the ways that we share it. Its purpose is to be heard. We’d like to hope that now Zero has developed a purpose for his collection, it too can stand for the time, care and passion he has put into accumulating it.