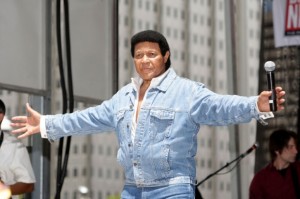 Once we've posted an article we tend to leave it behind. When we saw that Chubby Checker had made an out of court settlement with Hewlitt-Packard over his claims for $500 million in damages, allegedly caused by an App sold through the HP App Store, we had to revive our original article on it.

Anyone familiar with the Streisand-Effect will know that for some people in the public eye, it's often better to keep quiet rather than kick up a fuss. Unfortunately for Checker, he publicly objected to the App that used his name to guesstimate penis size and our childish sense of humour rejoiced.

The size of the settlement hasn't been announced, but we're sure there'll be an App out in no time to take a guess at it. You can read our original article below.

It would seem the originator of ‘The Twist’, Chubby Checker has taken exception to an app marketed towards women who just can’t wait to find out the size of a new partner’s appendage.The ‘Chubby Checker’ app transforms Hewlett-Packard’s Palm OS devices into a guestimator of endowment based on shoe size alone.

The original Checker is not happy to see his good name twisted in this way and is suing HP and Palm OS for a stiff $500m. Some estimates suggest the $0.99 app was downloaded just 84 times!

It would seem someone is either on ‘The Twist’ or is over compensating for something.