Starting out in 1966 in Sao Paulo, Os Mutantes (The Mutants) are very possibly the finest rock band to ever hail from South America. Specialising in a psychedelic rock familiar to anyone in Europe or North America, but mixing in slices of Samba, Bossa and Tropicàlia, they made an instantly familiar yet innovative racket that stood alongside the best of their Global peers.

Just like so many other great rock bands, Os Mutantes had their very own guitar hero, in Sérgio Dias, producing bursts of jazz, surf and garage fuzz riffs and runs on his ‘Guitarra de Ouro’ (Golden Guitar). Slowly they took on a more Prog Rock bent before sadly dissolving in 1978, like so many other bands of the era due to drug abuse, contract problems and ‘musical differences’. 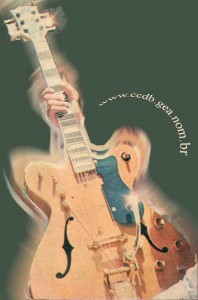 From then on it was cult stardom and an audience with waning memories until contract disputes were resolved in 1992 and 2000 resulting in 1970s material again seeing the light of day. We’re very lucky that they did as these releases encouraged public proclamations of love from Kurt Cobain, Beck and David Byrne amongst a whole raft of others and the subsequent reformation of Os Mutantes in 2006.